A symbol of connection between physician and patient 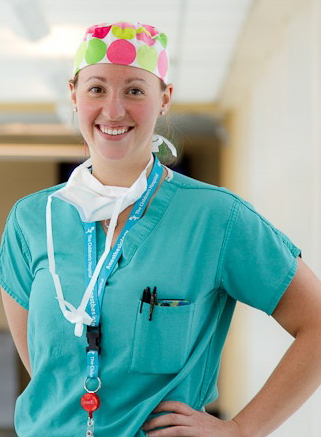 Nina Jean was a rancher’s daughter, who passed down the value of working hard and helping others. She was the kind of grandmother who let you pick out whatever sugary cereal you wanted in the grocery store and who baked an extra pumpkin pie at Thanksgiving so you could eat it for breakfast the next morning.

“And she was the most stylish Grammy on the block, with the perfect hand bag and the best shoes,” says Sarah Milliken Glabe, MD. “She had a way of always making you feel special, whether you were in her presence or miles away.”

In honor of her Grammy, Sarah gives $175 every year to the Medical Alumni Association Stethoscope Fund at CU Anschutz Medical Campus.

Every $175 buys a stethoscope for a first-year medical student at CU. Since the late 1990s, thousands of CU medical students have received stethoscopes at an annual ceremony to welcome them to School of Medicine and to the beginning of their medical careers.

“I felt impacted by the gift of a stethoscope when I was a medical student, and I hope that same impact is felt by students who come after me.” Sarah said. “It’s a reminder of the physicians we all have come to medical school to be and hopefully be in our careers after we leave.”

When Sarah was a first-year student in 2004, the medical school was still at Ninth and Colorado in Denver. Each student invited only two guests because the auditorium was small, and the happy crowd was standing room only. One by one, Dean Richard Krugman, MD, called the students to the stage. A professor gave Sarah a white physician coat and put a stethoscope around her neck.

“It was the first real feeling that I was a doctor,” Sarah said. “To this day the stethoscope serves as a reminder of why I got into medicine in the first place—that compassion and empathy with each patient is needed.”

Especially when the patient is your Grammy.

When Nina Jean was dying of bladder cancer, the doctors who treated her were “the kind of physicians who take a little extra time even when their schedule probably says not to,” Sarah said. “That intimate connection between you and the patient is so important. They allow you to be a part of their care, especially in what can be a scary and vulnerable time in their life. I think about how difficult my grandmother’s life was at the end, and the kindness and patience of these doctors really meant something to her, to my mom and to me.”

Now Sarah is the one standing on the stage at the White Coat Ceremony handing out stethoscopes to students as part of the Medical Alumni Association.

“I still have my stethoscope from CU. It was the stethoscope I first used, and I won’t ever get rid of it. Who knows? Maybe 50 years from now it will be found by one of my grandchildren and it will connect me to them.”